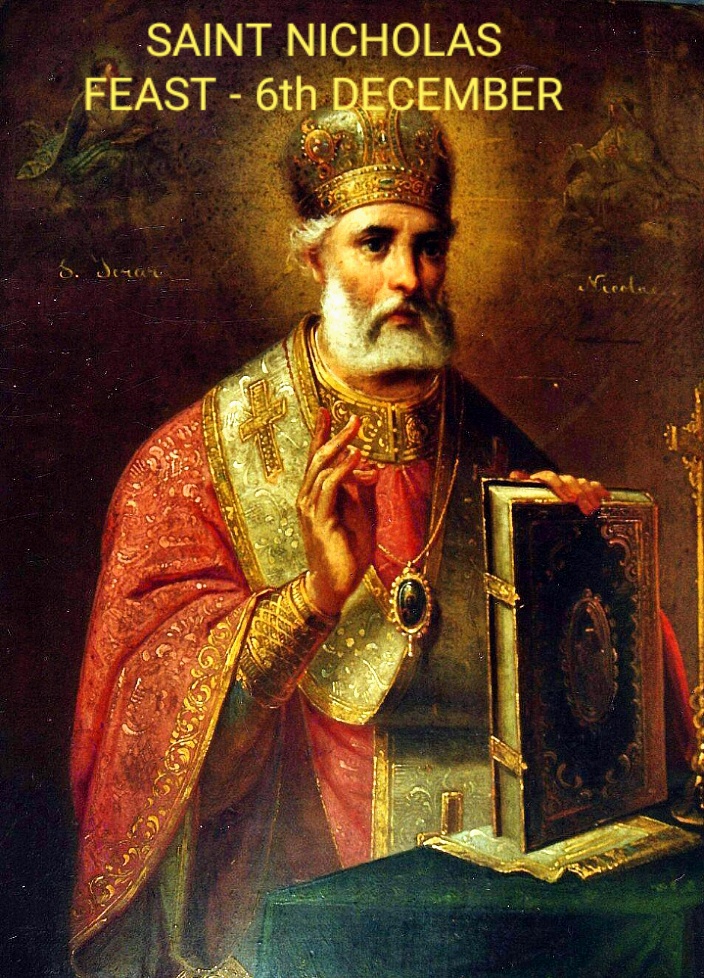 The true story of Santa Claus begins with Nicholas, who was born during the third century in the village of Patara in Asia Minor. At the time the area was Greek and is now on the southern coast of Turkey. His wealthy parents, who raised him to be a devout Christian, died in an epidemic while Nicholas was still young. Obeying Jesus’ words to “sell what you own and give the money to the poor,” Nicholas used his whole inheritance to assist the needy, the sick, and the suffering. He dedicated his life to serving God and was made Bishop of Myra while still a young man. Bishop Nicholas became known throughout the land for his generosity to those in need, his love for children, and his concern for sailors and ships.

Under the Roman Emperor Diocletian, who ruthlessly persecuted Christians, Bishop Nicholas suffered for his faith, was exiled and imprisoned. The prisons were so full of bishops, priests, and deacons, there was no room for the real criminals—murderers, thieves and robbers. After his release, Nicholas attended the Council of Nicaea in AD 325. He died December 6, AD 343 in Myra and was buried in his cathedral church, where a unique relic, called manna, formed in his grave. This liquid substance, said to have healing powers, fostered the growth of devotion to Nicholas. The anniversary of his death became a day of celebration, St. Nicholas Day, December 6th (December 19 on the Julian Calendar).

Through the centuries many stories and legends have been told of St. Nicholas’ life and deeds. These accounts help us understand his extraordinary character and why he is so beloved and revered as protector and helper of those in need.
One story tells of a poor man with three daughters. In those days a young woman’s father had to offer prospective husbands something of value—a dowry. The larger the dowry, the better the chance that a young woman would find a good husband. Without a dowry, a woman was unlikely to marry. This poor man’s daughters, without dowries, were therefore destined to go into slavery.

Mysteriously, on three different occasions, a bag of gold appeared in their home, providing the needed dowries. The bags of gold, tossed through an open window, are said to have landed in stockings or shoes left before the fire to dry. This led to the custom of children hanging stockings or putting out shoes, eagerly awaiting gifts from Saint Nicholas. Sometimes the story is told with gold balls instead of bags of gold. That is why three gold balls, sometimes represented as oranges, are one of the symbols for St. Nicholas. And so he is a gift-giver.

One of the oldest stories showing St. Nicholas as a protector of children takes place long after his death. The townspeople of Myra were celebrating the good saint on the eve of his feast day when a band of Arab pirates from Crete came into the district. They stole treasures from the Church of Saint Nicholas to take away as booty. As they were leaving town, they snatched a young boy, Basilios, to make into a slave. The emir, or ruler, selected Basilios to be his personal cupbearer, as not knowing the language, Basilios would not understand what the king said to those around him. So, for the next year Basilios waited on the king, bringing his wine in a beautiful golden cup.

For Basilios’ parents, devastated at the loss of their only child, the year passed slowly, filled with grief. As the next St. Nicholas’ feast day approached, Basilios’ mother would not join in the festivity, as it was now a day of tragedy. However, she was persuaded to have a simple observance at home—with quiet prayers for Basilios’ safekeeping. Meanwhile, as Basilios was fulfilling his tasks serving the emir, he was suddenly whisked up and away. St. Nicholas appeared to the terrified boy, blessed him, and set him down at his home back in Myra. Imagine the joy and wonderment when Basilios amazingly appeared before his parents, still holding the king’s golden cup. This is the first story told of St. Nicholas protecting children—which became his primary role in the West.

In France the story is told of three small children, wandering in their play until lost, lured, and captured by an evil butcher. St. Nicholas appears and appeals to God to return them to life and to their families. And so St. Nicholas is the patron and protector of children. Several stories tell of Nicholas and the sea. When he was young, Nicholas sought the holy by making a pilgrimage to the Holy Land. As he walked where Jesus walked, he sought to more deeply experience Jesus’ life, passion, and resurrection. Returning by sea, a mighty storm threatened to wreck the ship. Nicholas calmly prayed. The terrified sailors were amazed when the wind and waves suddenly calmed, sparing them all. And so St. Nicholas is the patron of sailors and voyagers.

Other stories tell of Nicholas saving his people from famine, sparing the lives of those innocently accused, and much more. He did many kind and generous deeds in secret, expecting nothing in return. Within a century of his death he was celebrated as a saint. Today he is venerated in the East as wonder, or miracle worker and in the West as patron of a great variety of persons-children, mariners, bankers, pawn-brokers, scholars, orphans, laborers, travelers, merchants, judges, paupers, marriageable maidens, students, children, sailors, victims of judicial mistakes, captives, perfumers, even thieves and murderers! He is known as friend and protector of all in trouble.

Sailors, claiming St. Nicholas as patron, carried stories of his favor and protection far and wide. St. Nicholas chapels were built in many seaports. As his popularity spread during the Middle Ages, he became the patron saint of Apulia (Italy), Sicily, Greece, and Lorraine (France), and many cities in Germany, Austria, Switzerland, Italy, Russia, Belgium, and the Netherlands (see list). Following his baptism, Grand Prince Vladimir I brought St. Nicholas’ stories and devotion to St. Nicholas to his homeland where Nicholas became the most beloved saint. Nicholas was so widely revered that thousands of churches were named for him, including three hundred in Belgium, thirty-four in Rome, twenty-three in the Netherlands and more than four hundred in England.

His tomb in Myra became a popular place of pilgrimage. Because of the many wars and attacks in the region, some Christians were concerned that access to the tomb might become difficult. For both the religious and commercial advantages of a major pilgrimage site, the Italian cities of Venice and Bari vied to get the Nicholas relics. In the spring of 1087, sailors from Bari succeeded in spiriting away the bones, bringing them to Bari, a seaport on the southeast coast of Italy. An impressive church was built over St. Nicholas’ crypt and many faithful journeyed to honor the saint who had rescued children, prisoners, sailors, famine victims, and many others through his compassion, generosity, and the countless miracles attributed to his intercession. The Nicholas shrine in Bari was one of medieval Europe’s great pilgrimage centers and Nicholas became known as “Saint in Bari.” To this day pilgrims and tourists visit Bari’s great Basilica di San Nicola.

Through the centuries St. Nicholas has continued to be venerated by Catholics and Orthodox and honored by Protestants. By his example of generosity to those in need, especially children, St. Nicholas continues to be a model for the compassionate life. Widely celebrated in Europe, St. Nicholas’ feast day, December 6th, kept alive the stories of his goodness and generosity. In Germany and Poland, boys dressed as bishops begged alms for the poor—and sometimes for themselves! In the Netherlands and Belgium, St. Nicholas arrived on a steamship from Spain to ride a white horse on his gift-giving rounds. December 6th is the main day for gift giving and merrymaking in Europe.

For example, in the Netherlands St. Nicholas is celebrated on the 5th, the eve of the day, by sharing candies (thrown in the door), chocolate initial letters, small gifts, and riddles. Dutch children leave carrots and hay in their shoes for the saint’s horse, hoping St. Nicholas will exchange them for small gifts. Simple gift-giving in early Advent helps preserve a Christmas Day focus on the Christ Child.

Glorious St. Nicholas, my special patron, from thy throne in glory, where thou dost enjoy the presence of God, turn thine eyes in pity upon me and obtain for me from our Lord the graces and helps that I need in my spiritual and temporal necessities (and especially this favor [mention your request], provided that it be profitable to my salvation). Be mindful, likewise, O glorious and saintly Bishop, of our Sovereign Pontiff, of Holy Church, and of all Christian people.

Bring back to the right way of salvation all those who are living steeped in sin and blinded by the darkness of ignorance, error, and heresy. Comfort the afflicted, provide for the needy, strengthen the fearful, defend the oppressed, give health to the infirm; cause all men to experience the effects of thy powerful intercession with the supreme Giver of every good and perfect gift. Amen 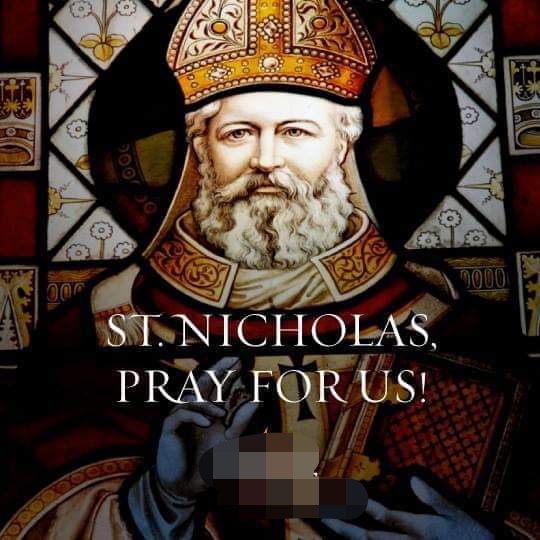 O God, who has glorified blessed Nicholas, Thine illustrious Confessor and Bishop, by means of countless signs and wonders, and who dost not cease daily so to glorify him; grant, we beseech Thee, that we, being assisted by his merits and prayers, may be delivered from the fires of hell and from all dangers. Through Christ our Lord. Amen
(Source : learnreligions.com )