FEAST OF SAINT PAUL OF THE CROSS – 20th OCTOBER 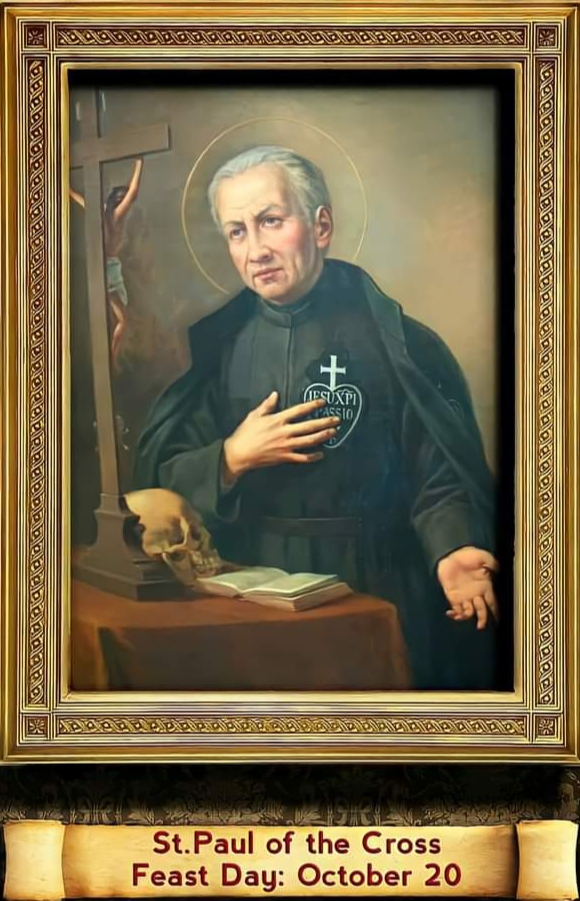 Saint Paul of the Cross, originally named Paolo Francesco Danei, was born on 3 January 1694, in the town of Ovada, Piedmont, between Turin and Genoa in the Duchy of Savoy in northern Italy. As an infant and youth he had great innocence and piety. The eighty-one years of his life were modeled on the Passion of Jesus Christ. In his childhood, when praying in church, a heavy bench fell on his foot, but the boy taking no notice of the bleeding wound, spoke of it as a rose sent from God.

In the hope of dying for the faith, he enlisted in a crusade against the Turks, but a voice from the Tabernacle warned him that he was to serve Christ alone. The vision of a scourge with love written on its lashes, assured him that his thirst for penance would be satisfied. After consulting his director, Bishop Gastinara of Alexandria in Piedmont, he reached the conclusion that God wished him to establish a congregation in honor of the Passion of Jesus Christ. On November 22, 1720, the bishop vested him with the habit shown to him in a vision, the same that the Passionists wear today.

From that moment the saint applied himself to repair the Rules of his institute. In 1721, he went to Rome to obtain the assent of the Holy See, and finally succeeded when Benedict XIV approved the Rules in 1741 and 1746. St. Paul built his first monastery near Obitello. Sometime later he established a larger community at the Church of St. John and Paul in Rome. 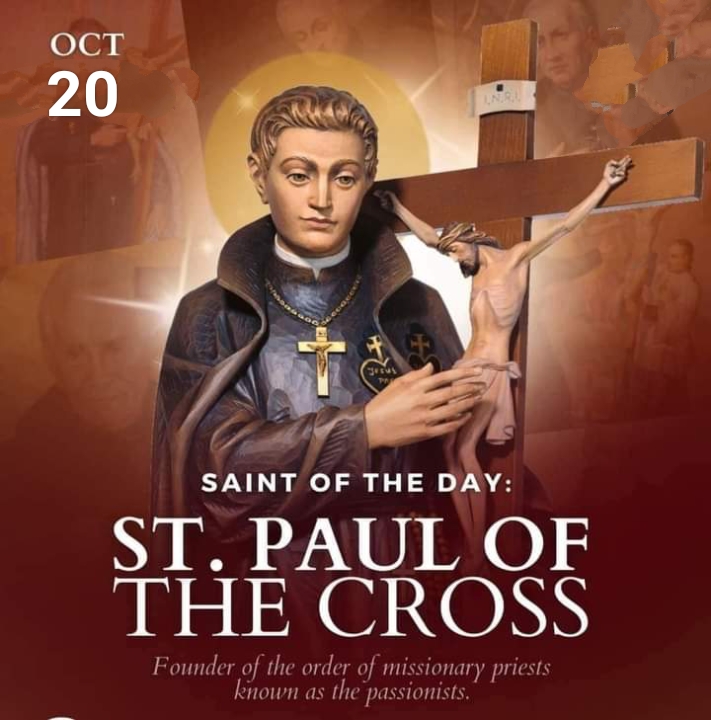 St. Paul chose as the badge of his Order a heart with three nails, in memory of the sufferings of Jesus, but for himself he invented a more secret and durable sign. Moved by the same holy impulse as Blessed Henry Suso, St. Jane Frances, and other Saints, he branded on his side the Holy Name, and its characters were found there after death. His heart beat with a supernatural palpitation, which was especially vehement on Fridays, and the heat at times was so intense as to scorch his shirt in the region of his heart.

Through fifty years of incessant bodily pain, and amidst all his trials, Paul read the love of Jesus everywhere, and would cry out to the flowers and grass, “Oh! be quiet, be quiet,” as if they were reproaching him with ingratitude. He died whilst the Passion was being read to him, and so passed with Jesus from the cross to glory. His saintly death occurred at Rome in the year 1775, at the age of eighty-one. He was canonized by Pope Pius IX in 1867. His feast day is October 20.

Heavenly Father, may the Priest Saint Paul, whose only love was the Cross, obtain for us your grace, O Lord, so that, urged on more strongly by his example, we may embrace our own cross with perseverance and courage. May your grace, we pray, at all times go before us and follow after, and make us always determined to carry out good works.

We are not all called to the sacrifice of martyrdom, but we are all bound to make our lives a continued sacrifice of ourselves to you Lord, and to perform every action in this perfect spirit of sacrifice. Thus we shall both live and die, perfectly resigned to your Holy Will, through our Lord Jesus Christ, your Son, who lives and reigns with you in the unity of the Holy Spirit, God, for ever and ever. Amen 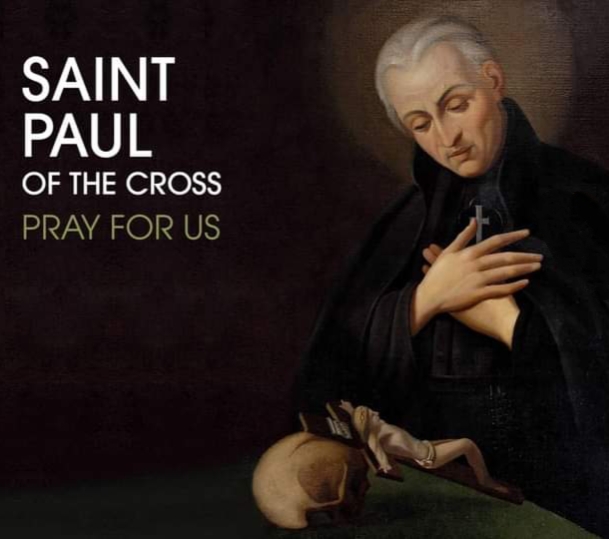 Saint Paul of the Cross, pray for us!