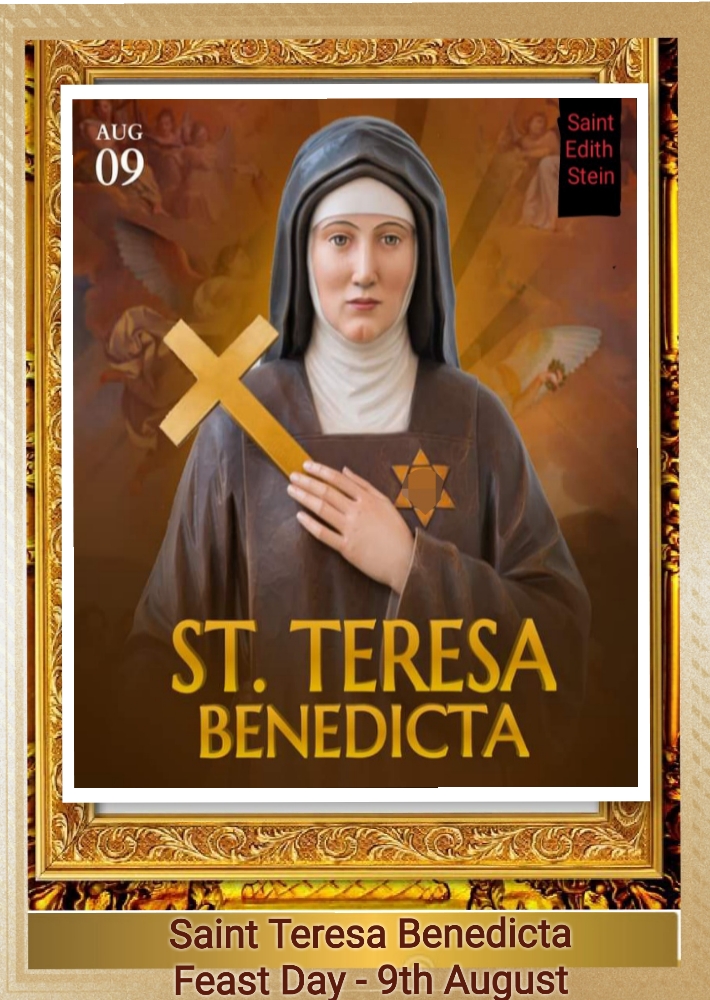 Edith Stein (religious name Saint Teresia Benedicta a Cruce OCD; also known as Saint Teresa Benedicta of the Cross or Saint Edith Stein; 12 October 1891 – 9 August 1942) was a German Jewish philosopher who converted to Christianity and became a Discalced Carmelite nun. She is canonized as a martyr and saint of the Catholic Church; she is also one of six patron saints of Europe.

She was born into an observant Jewish family, but had become an agnostic by her teenage years. Moved by the tragedies of World War I, in 1915, she took lessons to become a nursing assistant and worked in an infectious diseases hospital. After completing her doctoral thesis at the University of Freiburg in 1916, she obtained an assistantship there. 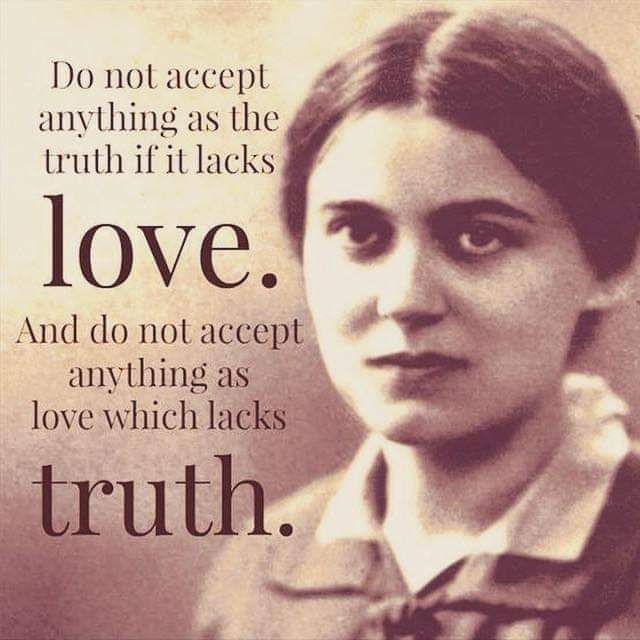 A brilliant philosopher, Edith Stein was so captivated by reading the autobiography of Teresa of Avila (October 15) that she began a spiritual journey that led to her Baptism in 1922. Twelve years later she imitated Teresa by becoming a Carmelite, taking the name Teresa Benedicta of the Cross.

Born into a prominent Jewish family in Breslau (now Wroclaw, Poland), Edith abandoned Judaism in her teens. As a student at the University of Göttingen, she became fascinated by phenomenology, an approach to philosophy. Excelling as a protégé of Edmund Husserl, one of the leading phenomenologists, Edith earned a doctorate in philosophy in 1916.

She continued as a university teacher until 1922 when she moved to a Dominican school in Speyer; her appointment as lecturer at the Educational Institute of Munich ended under pressure from the Nazis. After living in the Cologne Carmel (1934 – 38), she moved to the Carmelite monastery in Echt, Netherlands. 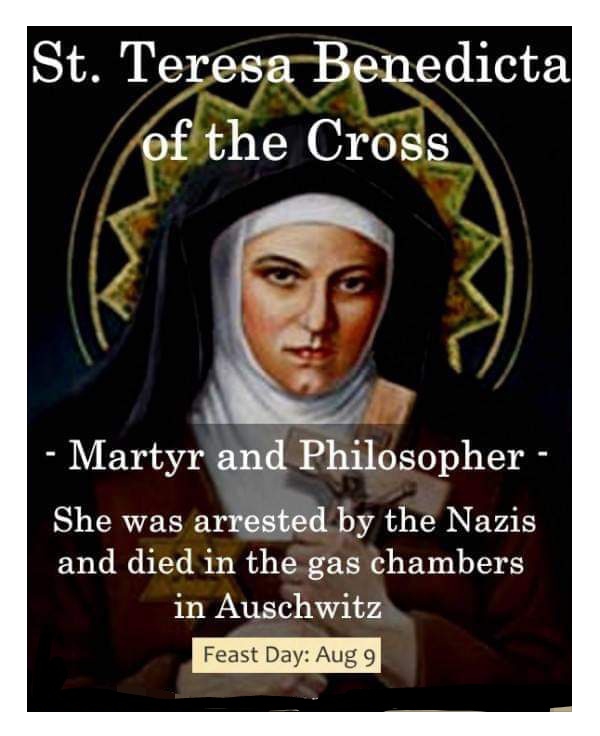 The Nazis occupied that country in 1940. In retaliation for being denounced by the Dutch bishops, the Nazis arrested all Dutch Jews who had become Christians. Teresa Benedicta and her sister Rosa, also a Catholic, died in a gas chamber in Auschwitz on August 9, 1942. Saint John Paul II beatified Teresa Benedicta in 1987 and canonized her 12 years later.

The writings of Edith Stein fill 17 volumes, many of which have been translated into English. A woman of integrity, she followed the truth wherever it led her. After becoming a Catholic, Edith continued to honor her mother’s Jewish faith. Sister Josephine Koeppel, O.C.D. , translator of several of Edith’s books, sums up this saint with the phrase, “Learn to live at God’s hands.”

In his homily at the canonization Mass, Pope John Paul II said: “Because she was Jewish, Edith Stein was taken with her sister Rosa and many other Catholics and Jews from the Netherlands to the concentration camp in Auschwitz, where she died with them in the gas chambers.

Today we remember them all with deep respect. A few days before her deportation, the woman religious had dismissed the question about a possible rescue: ‘Do not do it! Why should I be spared? Is it not right that I should gain no advantage from my Baptism? If I cannot share the lot of my brothers and sisters, my life, in a certain sense, is destroyed.’”

Addressing himself to the young people gathered for the canonization, the pope said: “Your life is not an endless series of open doors! Listen to your heart! Do not stay on the surface but go to the heart of things! And when the time is right, have the courage to decide! The Lord is waiting for you to put your freedom in his good hands.” 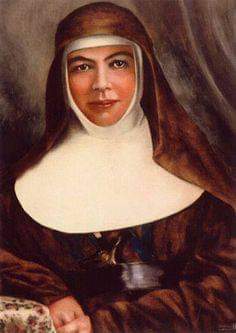 Lord, God, Almighty Father, you uplifted Saint Teresa Benedicta to the fullness of the mysticism of the Cross at the hour of her martyrdom. Give us the same honor of taking up the Cross allotted to us in this life, with vigor and veneration.

Through her intercession, may we seek you always, our Truth and our Life, to remain faithful to you until death. May we boldly proclaim your covenant of love validated in the blood of our Savior and Redeemer, who earned salvation for humanity by his death. We ask this through Christ our Lord. Amen 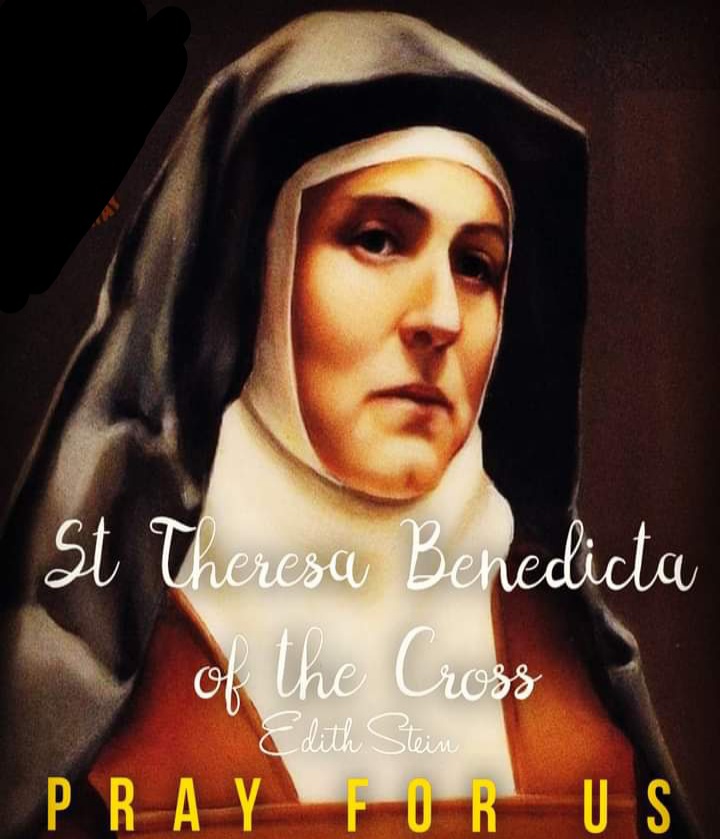 Saint Teresa Benedicta of the Cross,
pray for us.