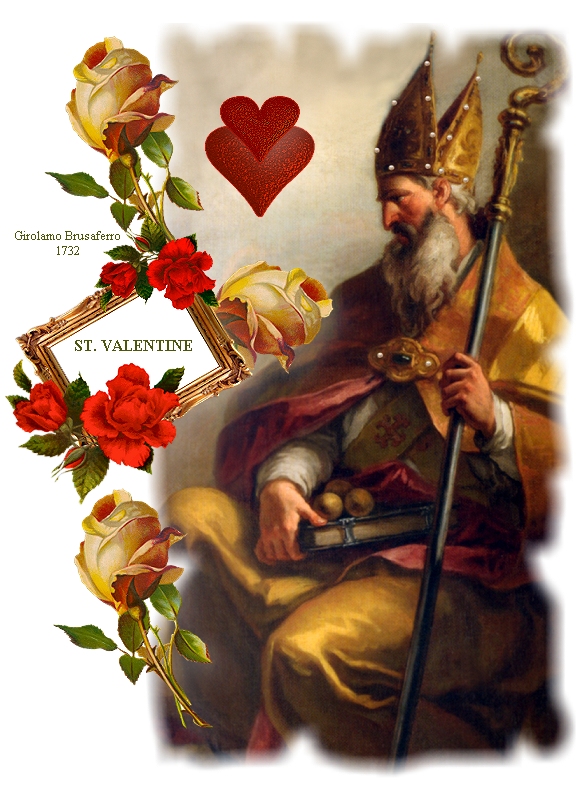 The Roman Martyrology lists not one, but two Valentines, for February 14th. The first reads thus: “On February 14th, on the Via Flaminia in Rome, St Valentine, priest and martyr, after performing various healing miracles, and known for his culture, was killed by decapitation under Claudius Caesar.” The second one states: “On February 14th, in Terni, after being severely beaten, St Valentine was imprisoned and since they (his captors) were unable to overcome his resistance, they secretly dragged him out of prison at midnight and beheaded him on the orders of Placidus, the prefect of Rome”.

Although the Roman Catholic Church continues to recognize St. Valentine as a saint of the church, he was removed from the General Roman Calendar in 1969 because of the lack of reliable information about him. Saint Valentine was a clergyman – either a priest or a bishop – in the Roman Empire who ministered to persecuted Christians. He was martyred and his body buried at a Christian cemetery on the Via Flaminia on February 14, which has been observed as the Feast of Saint Valentine (Saint Valentine’s Day) since at least the eighth century.

Relics of him were kept in the Church and Catacombs of San Valentino in Rome, which “remained an important pilgrim site throughout the Middle Ages until the relics of St. Valentine were transferred to the church of Santa Prassede during the pontificate of Nicholas IV”. His skull, crowned with flowers, is exhibited in the Basilica of Santa Maria in Cosmedin, Rome; other relics of him were taken to Whitefriar Street Carmelite Church in Dublin, Ireland, where they remain; this house of worship continues to be a popular place of pilgrimage, especially on Saint Valentine’s Day, for those seeking love.

Saint Valentine is commemorated in the Anglican Communion and the Lutheran Churches on February 14. In the Eastern Orthodox Church, he is recognized on July 6; in addition, the Eastern Orthodox Church observes the feast of Hieromartyr Valentine, Bishop of Interamna, on July 30. Although his name was removed from the General Roman Calendar, leaving his liturgical celebration to local calendars, use of the pre-1970 liturgical calendar is also authorized under the conditions listed in the motu proprio Summorum Pontificum of 2007.

The Roman Catholic Church continues to recognize him as a saint, authorizing liturgical veneration of him on February 14 in any place where that day is not devoted to some other obligatory celebration, in accordance with the rule that on such a day the Mass may be that of any saint listed in the Martyrology for that day. Saint Valentine does not occur in the earliest list of Roman martyrs, the Chronography of 354, although the patron of the Chronography’s compilation was a wealthy Roman Christian named Valentinus.

The feast of St. Valentine of February 14 was first established in 496 by Pope Gelasius I, who included Valentine among all those “… whose names are justly reverenced among men, but whose acts are known only to God.” The Catholic Encyclopedia and other hagiographical sources speak of three Saints Valentine that appear in connection with February 14. One a Roman priest, another the bishop of Termination, both buried along the Via Flaminia outside Rome, and the third was said to be a saint who suffered on the same day with a number of companions in the Roman province of Africa, of whom nothing else is known.

Though the extant accounts of the martyrdoms of the first two listed saints are of a late date and contain legendary elements, “a common nucleus of fact” may underlie the two accounts and they may refer to “a single person”. According to the official biography of the Diocese of Terni, Bishop Valentine was born and lived in Interamna and while on a temporary stay in Rome he was imprisoned, tortured, and martyred there on February 14, 269. His body was hastily buried at a nearby cemetery and a few nights later his disciples retrieved his body and returned him home. The Roman Martyrology, the Catholic Church’s official list of recognized saints, gives one Saint Valentine, a martyr who died on the Via Flaminia.

The name “Valentine” derived from valens (worthy, strong, powerful), was popular in Late Antiquity. About eleven other saints having the name Valentine are commemorated in the Roman Catholic Church. A common hagiography describes Saint Valentine as a priest of Rome or as the former Bishop of Terni, an important town of Umbria, in central Italy. While under house arrest of Judge Asterius, and discussing his faith with him, Valentinus (the Latin version of his name) was discussing the validity of Jesus. The judge put Valentinus to the test and brought to him the judge’s adopted blind daughter. If Valentinus succeeded in restoring the girl’s sight, Asterius would do whatever he asked. Valentinus, praying to God, laid his hands on her eyes and the child’s vision was restored.

Immediately humbled, the judge asked Valentinus what he should do. He replied that all of the idols around the judge’s house should be broken, and that the judge should fast for three days and then undergo the Christian sacrament of baptism. The judge obeyed and, as a result of his fasting and prayer, freed all the Christian inmates under his authority. The judge, his family, and his forty-four member household of adult family members and servants were baptized. Valentinus was later arrested for continuing to evangelize and was sent to the prefect of Rome, to the emperor Claudius Gothicus (Claudius II).

Claudius took a liking to him until Valentinus tried to convince Claudius to embrace Christianity, whereupon Claudius refused and condemned Valentinus to death, commanding that Valentinus either renounce his faith or he would be beaten with clubs and beheaded. Valentinus refused and Claudius’ command was executed outside the Flaminian Gate February 14, 269. The very brief vita of St Valentine states that he was executed for refusing to deny Christ by the order of the “Emperor Claudius” in the year 269. Before beheading him, this Valentine restored sight and hearing to the daughter of his jailer.

The Benedictine Order maintained the church of St Valentine in Terni during the Middle Ages and spread the cult of Valentine’s Day in their monasteries in France and England. The tradition of his being patron saint of lovers finds its origin in an ancient English text by Geoffrey Chaucer, according to whom birds start mating on Valentine’s Day. In mid-February, in fact, nature begins to awaken from its winter lethargy, so Saint Valentine has become the saint who announces the coming spring – which is why he is sometimes represented holding the sun in his hand.

Valentine did really exist, because archaeologists have unearthed a Roman catacomb and an ancient church dedicated to St. Valentine. In 496 AD Pope Gelasius marked February 14th as a celebration in honor of his martyrdom.
Relics of St. Valentine can be found all over the world. A flower-crowned skull can be found in the Basilica of Santa Maria in Cosmedin, Rome. In 1836, other relics were exhumed from the catacombs of Saint Hippolytus on the Via Tiburtina and were identified as Valentine’s. They were transported for a special Mass dedicated to young lovers. 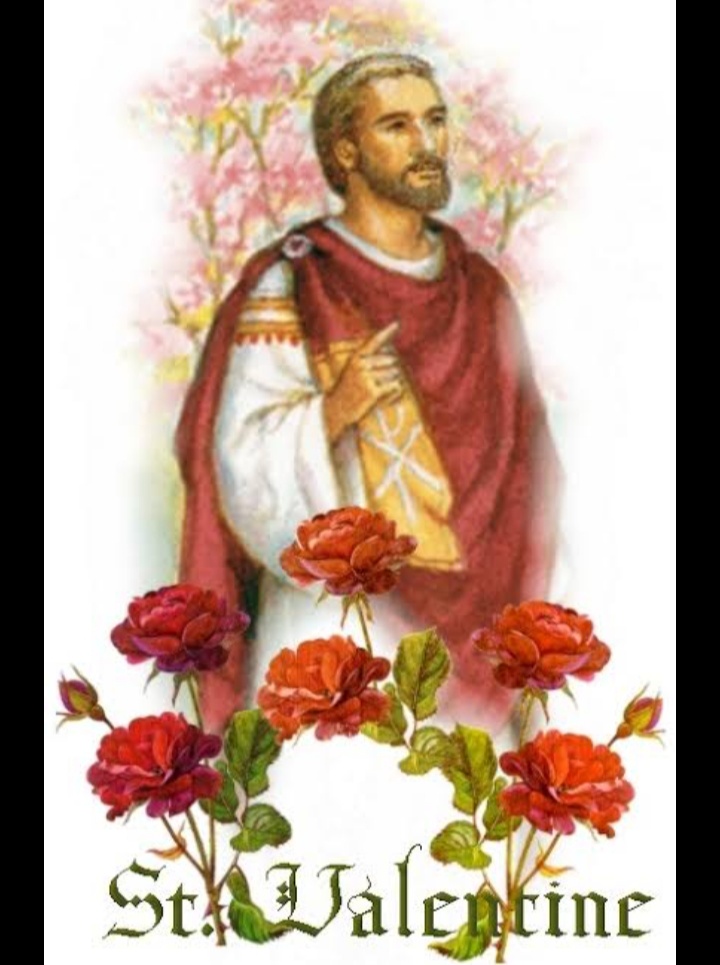 Grant, we beseech you, Almighty Father, that we who celebrate the feast of Saint Valentine, your Martyr, may, by his intercession, be delivered from all the evils and dangers that threaten us.

We make this prayer through our Lord Jesus Christ your Son, Who lives and reigns with you in the unity of the Holy Spirit, one God for ever and ever. Amen

O holy Martyr, St. Valentine, pray for the Faithful, who are so persevering in celebrating your memory. The day of Judgment will reveal to us all your glorious merits. Oh! intercede for us, that we may then be made your companions at the right hand of the Great Judge, and be united with you eternally in heaven. Amen 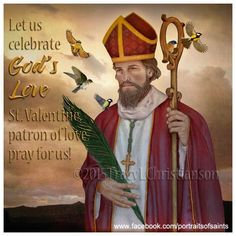