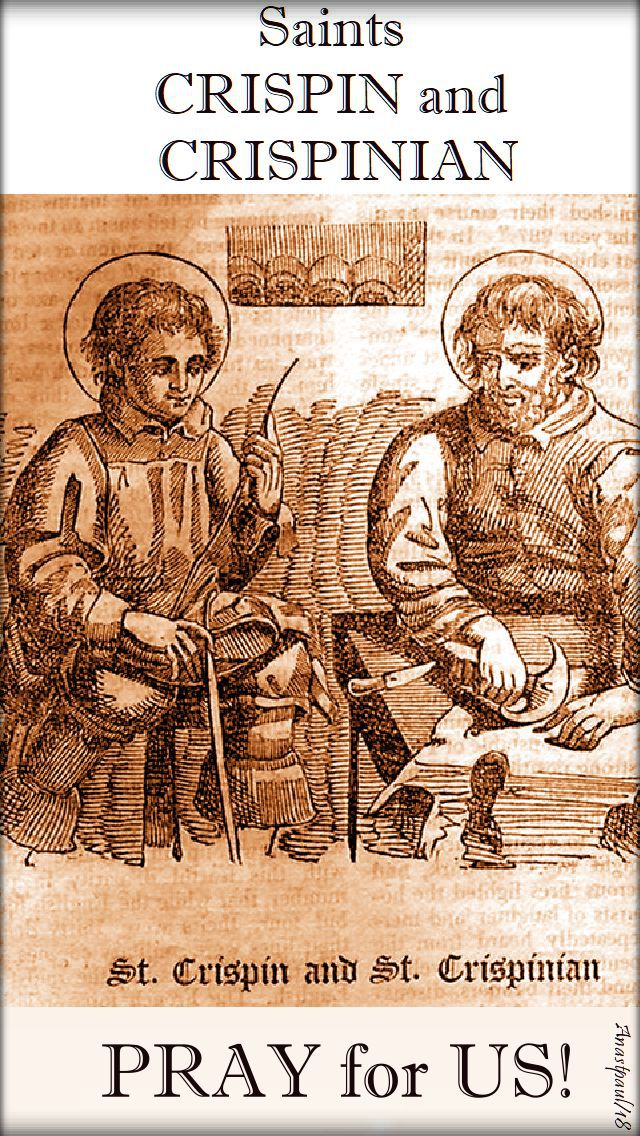 Saint Crispin’s Day, or the Feast of Saint Crispin, falls on 25 October and is the feast day of the Christian saints Crispin and Crispinian, twins who were martyred in c. 286. Their charity, piety, and contempt of material things impressed the locals and many were converted to Christianity.

Crispin and Crispinian, noble Roman brothers who with St. Quintinus, went to Gaul to preach the gospel and settled at Soissons, were most successful in conversion work during the day and worked as shoemakers at night. By order of Emperor Maximian, who was visiting in Gaul, they were subjected to torture. When unsuccessful in trying to kill them, for the brothers refused to yield to the persecutors of the Faith who wanted Crispin and Crispinian to apostatize, they were both beheaded in Rome, in 286 A.D.

The feast day of Saints Crispin and Crispinian is 25 October. Although this feast was removed from the Roman Catholic Church’s universal liturgical calendar following the Second Vatican Council, the two saints are still commemorated on that day in the most recent edition of the Roman Church’s martyrology.

In the sixth century, a stately basilica was erected at Soissons over these saints’ graves, and St. Eligius, a famous goldsmith, made a costly shrine for the head of St. Crispinian. Crispin and Crispinian are honored in the Church of England on 25 October. They are patron saints of cobblers, curriers, tanners, and leather workers.

Almighty Ever-living God, who gave Saints Crispin and Crispinian the grace of suffering for Christ, come, in your divine mercy, we pray, to the help of our own weakness, that, as your Saints did not hesitate to die for your sake, we, too, may live bravely in confessing you.

This we beseech you, through our Lord Jesus Christ, your Son, who lives and reigns with you in the unity of the Holy Spirit, one God, for ever and ever. Amen.

Saints Crispin and Crispinian, pray for us!