SOLEMNITY OF THE MOST SACRED HEART OF JESUS – 24th JUNE 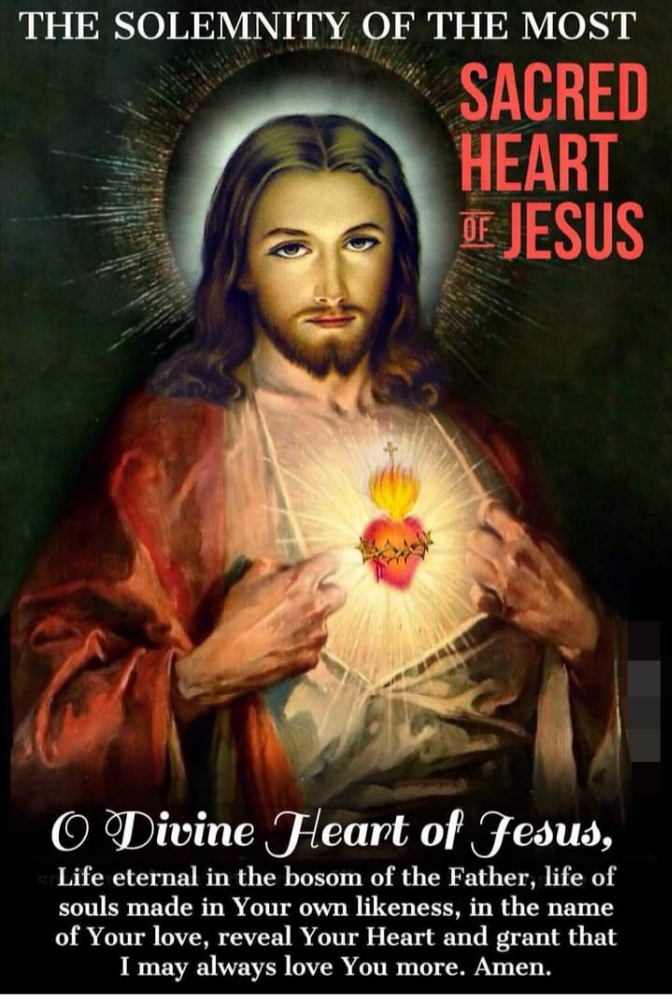 SOLEMNITY OF THE MOST SACRED HEART OF JESUS.

Since it was preparation day, in order that the bodies might not remain on the cross on the sabbath, for the sabbath day of that week was a solemn one, the Jews asked Pilate that their legs be broken and they be taken down. So the soldiers came and broke the legs of the first and then of the other one who was crucified with Jesus. But when they came to Jesus and saw that he was already dead, they did not break his legs, but one soldier thrust his lance into his side, and immediately blood and water flowed out. An eyewitness has testified, and his testimony is true; he knows that he is speaking the truth, so that you also may come to believe. For this happened so that the Scripture passage might be fulfilled: Not a bone of it will be broken. And again another passage says: They will look upon him whom they have pierced. – John 19:31-37 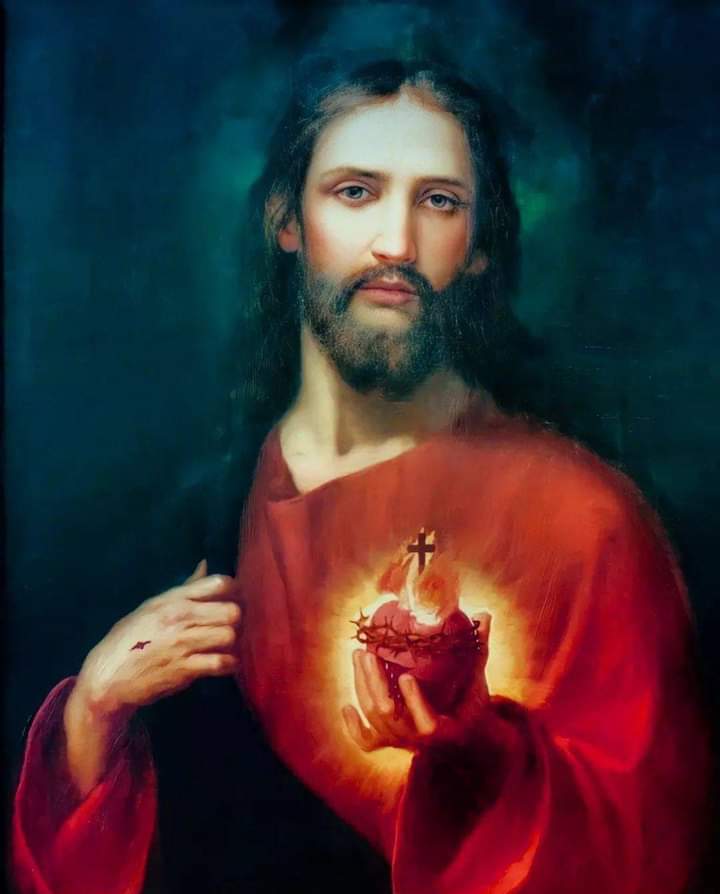 The Solemnity of the Most Sacred Heart of Jesus falls 19 days after Pentecost, on a Friday. The Feast of the Sacred Heart has been in the Roman Catholic liturgical calendar since 1856.

Devotion to the Sacred Heart is one of the most well-known devotions, taking Jesus’ physical heart to represent his divine love for humanity. This devotion is predominantly used in the Catholic Church and among some high-church Anglicans and Lutherans. The devotion especially emphasizes the unmitigated love, compassion, and long-suffering of the heart of Christ towards humanity. 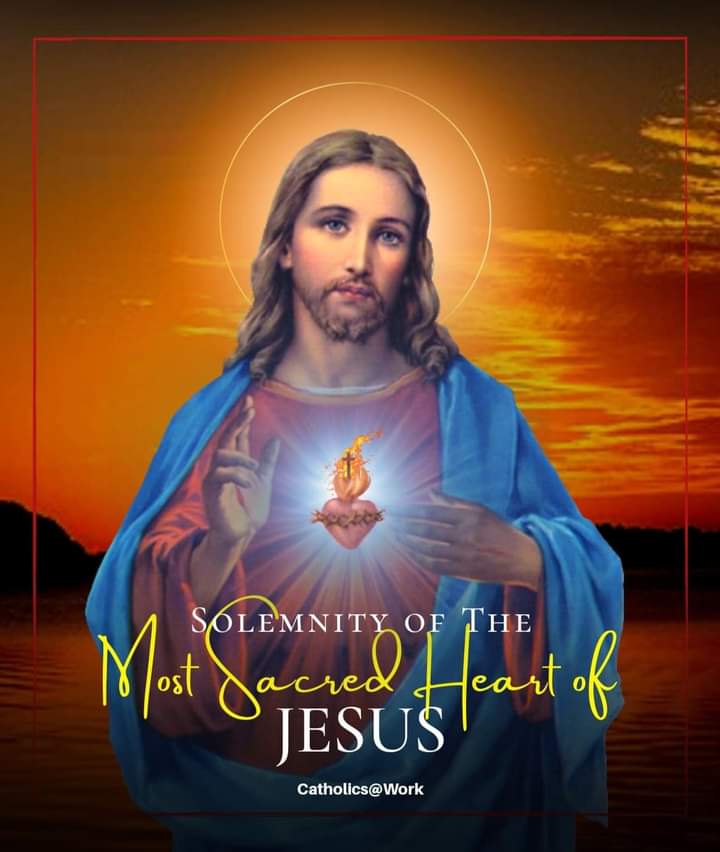 Predecessors to this devotion can be traced back to the middle ages in Catholic mysticism. In the first ten centuries of Christianity, there is some evidence to support a devotion to the Sacred Heart, albeit indirectly. The religious zealotry of Saint Bernard of Clairvaux and Saint Francis of Assisi coupled with the enthusiasm of crusaders returning from the east in the twelfth and thirteenth centuries inspired renewed devotion to the sacred wounds of Jesus and celebration of his humanity.

The Sacred Heart is often depicted in Christian art as a flaming heart shining with divine light, pierced by the lance-wound, encircled by the crown of thorns, surmounted by a cross and bleeding. The celebration involves a special Mass including the Sacred Heart imagery. 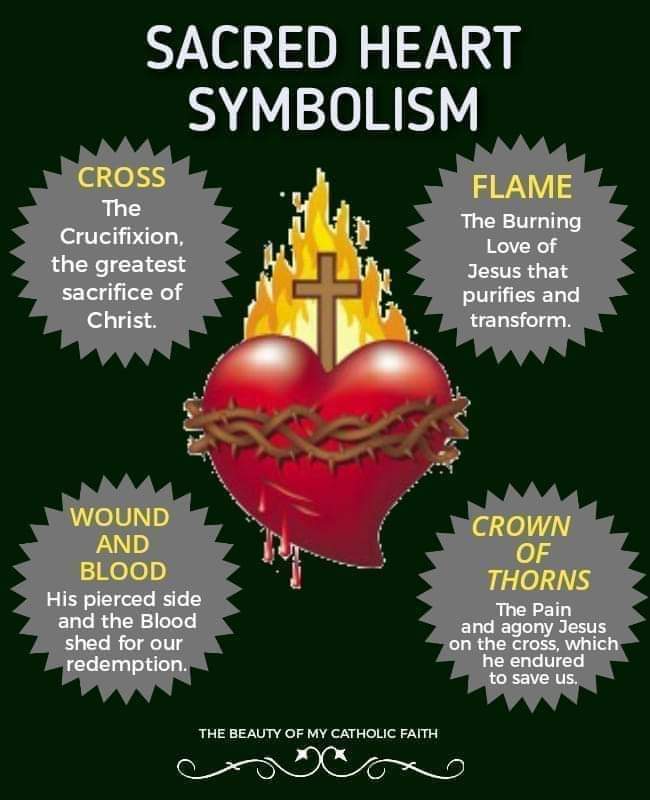 Jesus, our Savior and Redeemer of humanity, look down upon us in humble obeissance before your altar. We belong to you, and you alone. We wish to abide in you as you abide in us, more closely united with you. Therefore, each one of us freely consecrate ourselves today, to your most Sacred Heart.

We are sorry and ask pardon for the several times that we have ignored and despised your statutes and commands, and have rejected you. Have mercy on us all, ever merciful Lord, and grant us access to your Sacred Heart. You are our King and Majesty, not only of your faithful elect, but also of all those who have deserted you and for whose return you long for. We pray that, like the prodigal son, they may quickly return to the Father’s house to prevent death and desolation, leading to total destruction, wretchedness, and condemnation.

For those who have stumbled and fallen Lord, uplift them with your mighty hand and guide them through the Power of the Holy Spirit to dwell, with revelation of the truth. Mercifully forgive their sinful reproaches Lord, and grant that they secure unity of faith, so that there may be but one flock and one Shepherd. 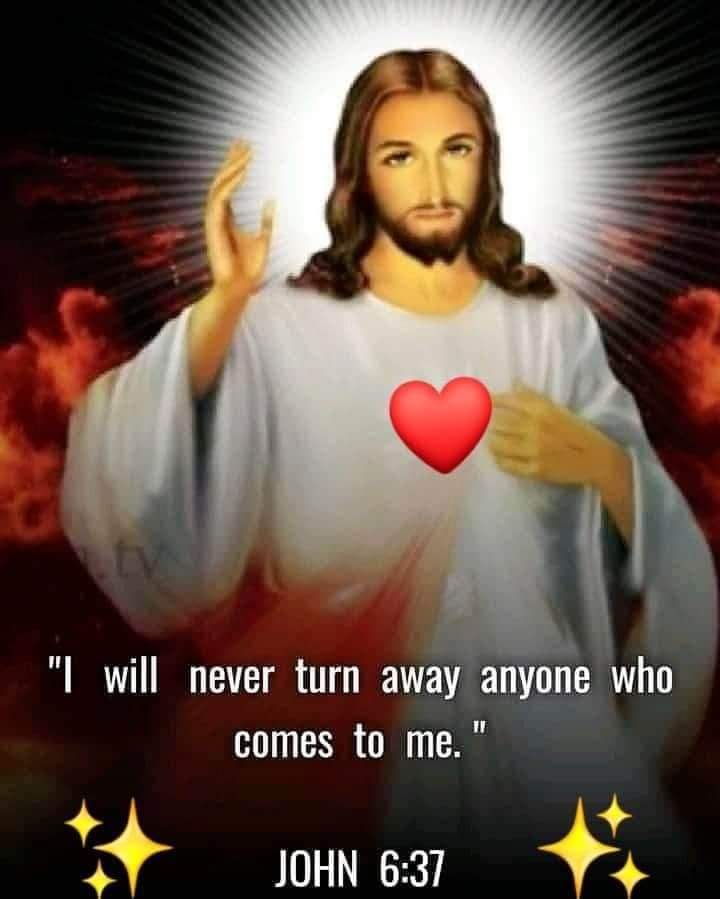 You are King of all believers and even the unbelievers, who, knowing you, refuse to acknowledge you and dwell in darkness. Turn your eyes of clemency towards the children of the mankind of your creation, once your chosen people, but now distanced from you, for whose salvation you came as the Son of Man, dying for their eternal salvation.

Grant, O Lord, to your Church assurance of freedom and immunity from harm. Let peace and order reign in all nations, and make the earth resound with the praises for your Sacred Heart.

Almighty Father, who glory in the Heart of your beloved Son, which is filled to overflowing with love for the human race, may we be made worthy to receive in abundance, the immeasurable flow of gifts and graces, through our Lord Jesus Christ, your Son, who lives and reigns with you in the unity of the Holy Spirit, God, for ever and ever. Amen 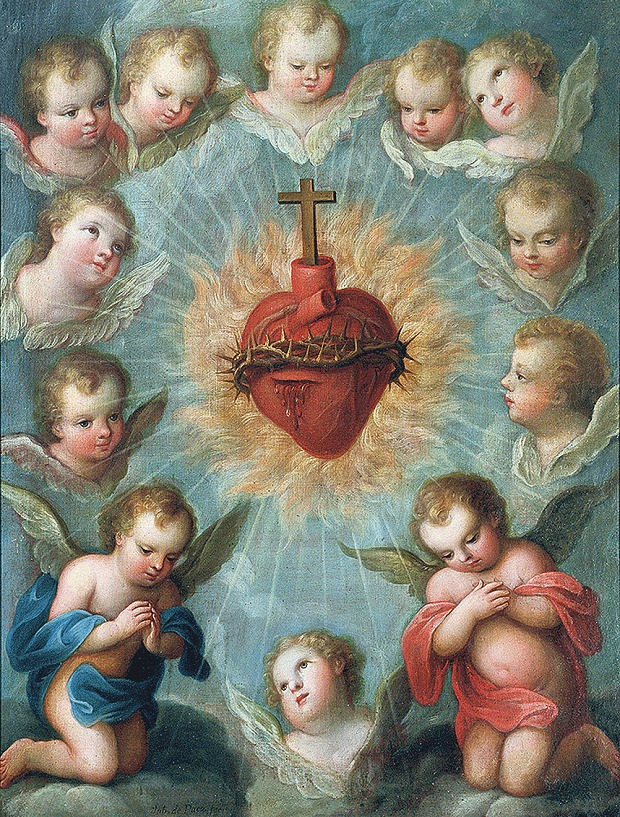