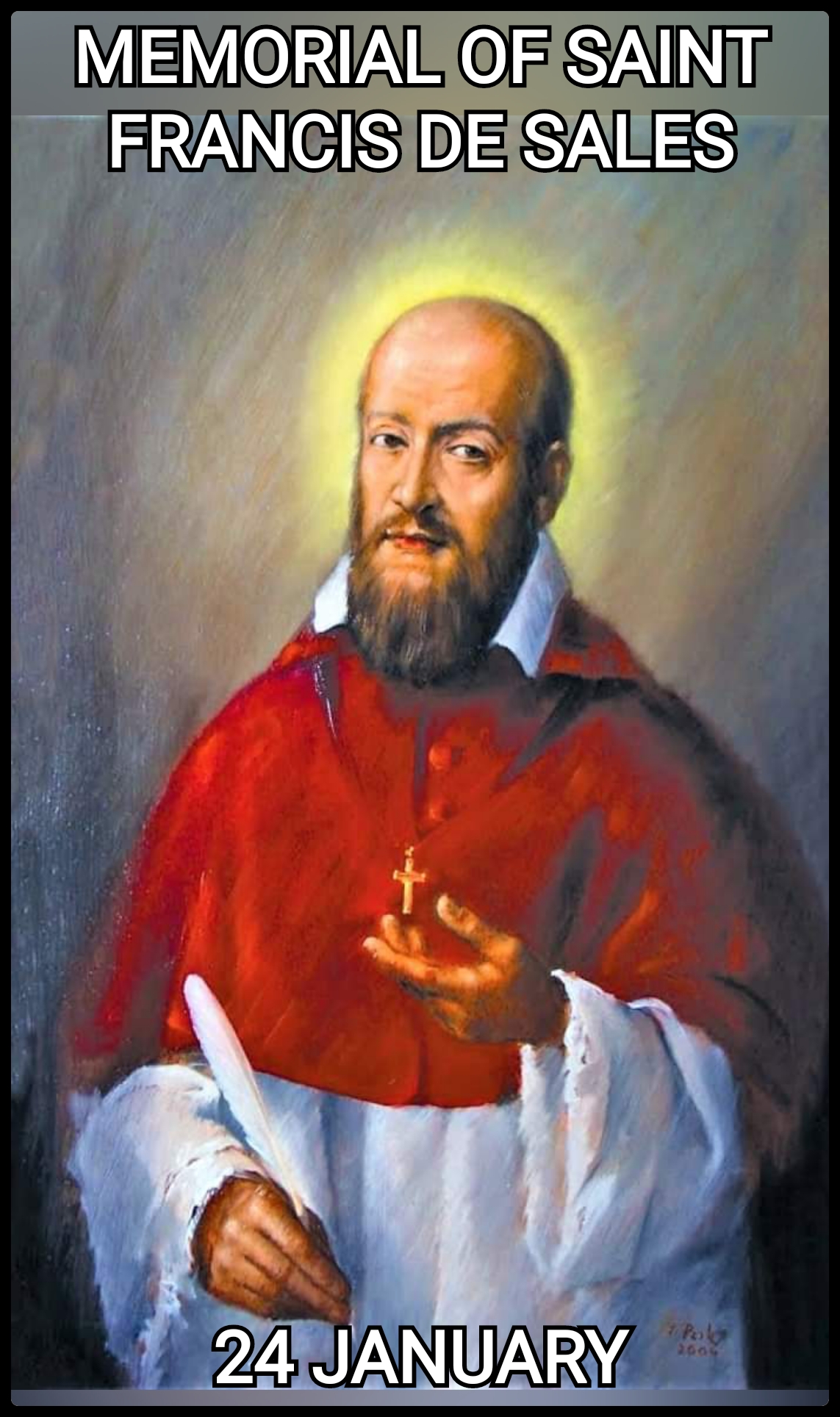 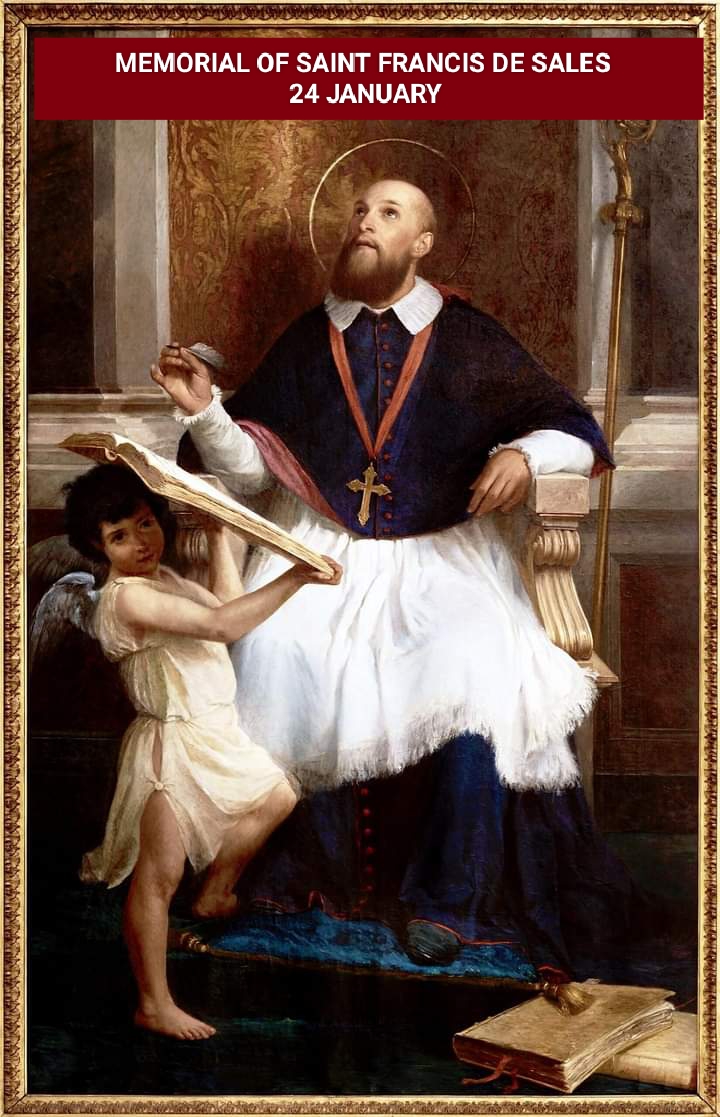 Saint Francis de Sales who was quite a religious celebrity, was a humble, handsome, tough, and zealous priest and bishop. He was known to be holy by everyone, especially those closest to him. He mingled easily with princes, kings, and popes, who welcomed his charming and educated presence. He embodied to the fullest a superlative pastoral and intellectual productivity, vital, vibrant, constantly on the move. 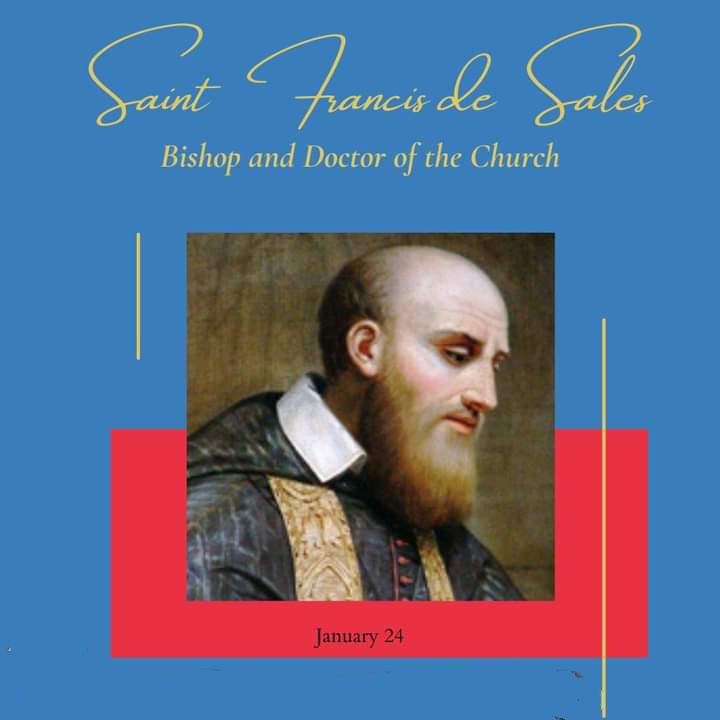 Francis de Sales was born two months premature on 21 August 1567 in the Château de Sales into the noble Sales family of the Duchy of Savoy, France. His father was François de Sales, Lord of Sales, Novel, and by marriage, de Boisy. His mother was a noblewoman, Françoise de Sionnaz, the only child of the prominent magistrate, Melchior de Sionnaz, de la Thuile, and de Boisy. One of the noblest families in Savoy, Francis’ father was generally known as M. de Boisy. 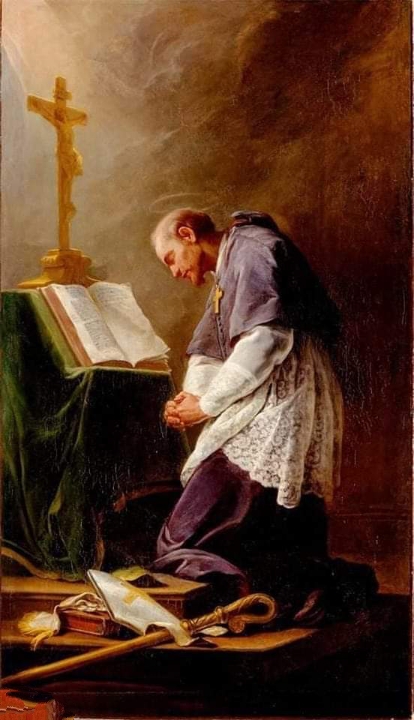 He was baptized Francis Bonaventura after his godparents. His father wanted him, the first of his six sons, to attend the best schools in preparation for a career as a magistrate. He, therefore, enjoyed a privileged education in the nearby town of La Roche-Sur-Foron, and at the age of eight at the Capuchin college in Annecy. In 1578, de Sales went to the Collège de Clermont, then a Jesuit institution, to study rhetoric and humanities. He took lessons in the gentlemanly pursuits of riding, dancing, and fencing. 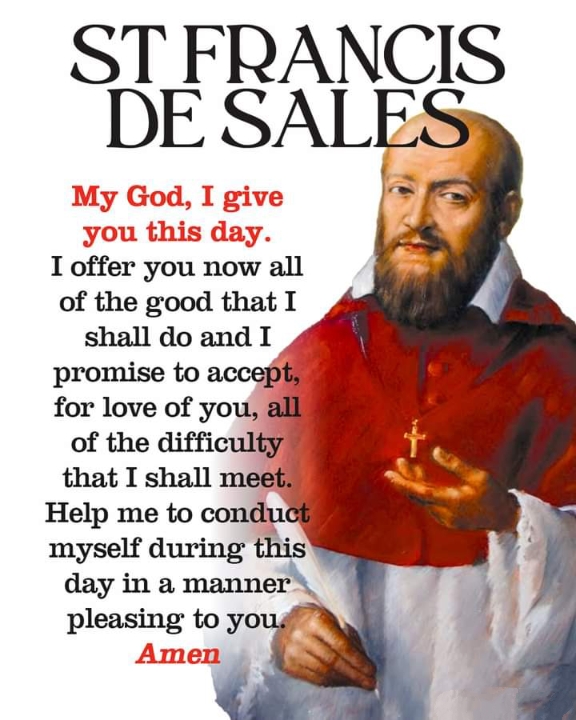 In 1586 Francis de Sales attended a theological discussion about predestination, convincing him of his damnation to hell. A personal crisis of despair resulted. This conviction lasted through December 1586. His great despair made him physically ill and even bedridden for a time. Sometime in either late December or early January 1587, he visited the parish Saint-Étienne-des-Grès, Paris, where he prayed the “Memorare” before a famed statue of Our Lady of Good Deliverance. He consecrated himself to the Blessed Virgin Mary and decided to dedicate his life to God with a vow of chastity. He then became a tertiary of the Minim Order. 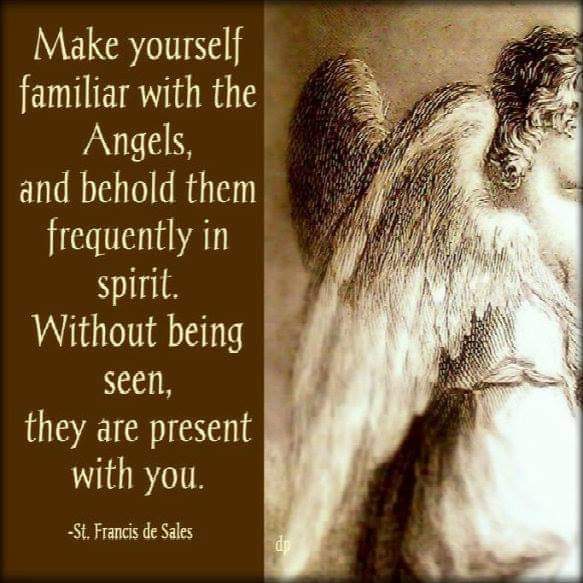 De Sales ultimately concluded that God had good in store for him, because “God is love”, as John’s First Epistle attests. This faithful devotion to God not only expelled his doubts but also influenced the rest of his life and his teachings. His way of teaching Catholic spirituality is often referred to as the Way of Divine Love, or the Devout Life, taken from a book he wrote of a similar name: Introduction to the Devout Life”. He completed his studies at Collège de Clermont and enrolled at the University of Padua in Italy, where he studied both law and theology. De Sales took Antonio Possevino, a priest in the Society of Jesus, as his spiritual director. 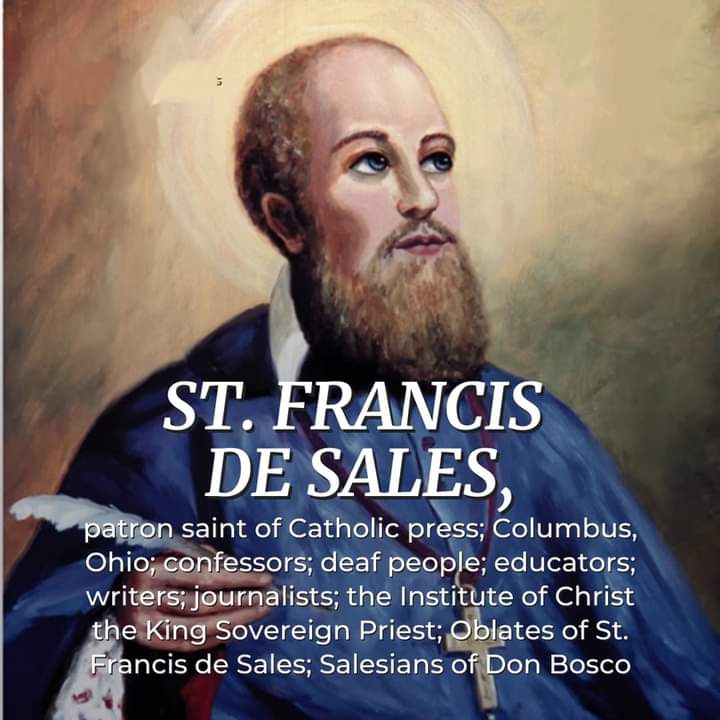 In 1592, de Sales received his doctorate in law and theology and made up his mind to become a priest. As the eldest son and heir, he held the title of Seigneur de Villeroget. The Senate of Chambéry admitted him as a lawyer. Meanwhile, his father secured various positions for Francis, including an appointment as a senator. His father also chose a wealthy noble heiress as his bride. But Francis refused to marry, preferring to stay focused on his chosen path. 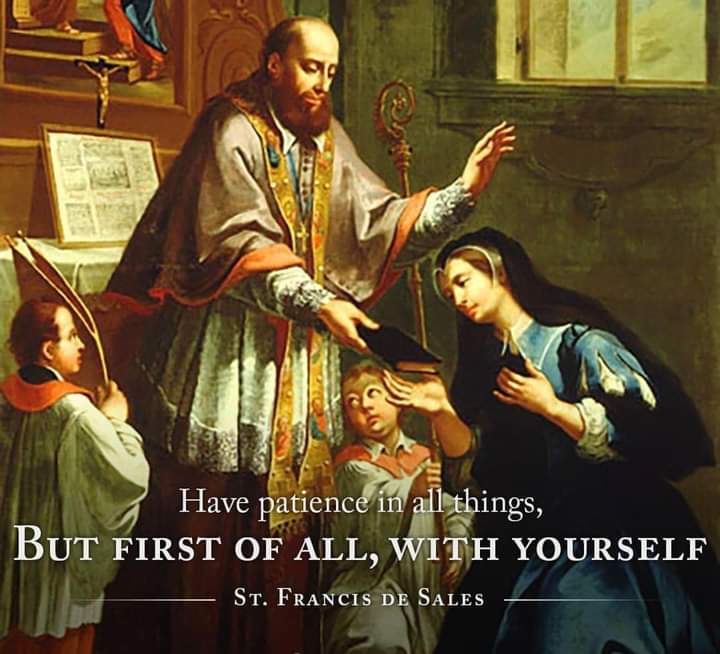 His father initially refused to accept that Francis had chosen the priesthood rather than fulfill his expectations with a political-military career. His cousin, Canon Louis de Sales, persuaded the Bishop of Geneva, Claude de Granier, to obtain for Francis the position of provost of the cathedral chapter of Geneva, a post in the patronage of the pope. It was the highest office in the diocese; M. de Boisy yielded. After signing over to his younger brother, Louis, his title and right of succession, Francis was ordained in 1593. 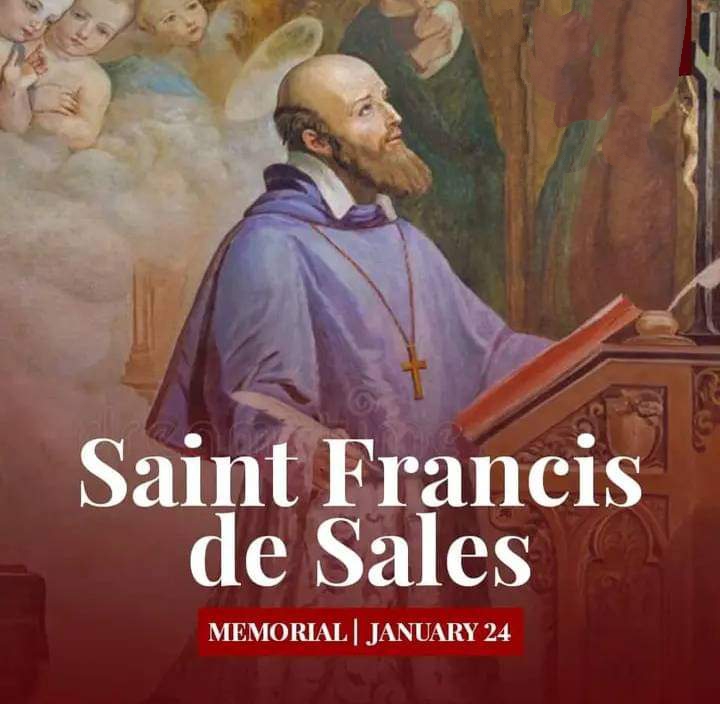 Because the Calvinists controlled Geneva, the bishop resided about twenty miles south, in Annecy. De Sales preached in the Cathedral of Annecy, at parish churches, and before confraternities. He was an effective speaker, his speech deep and rich in tone, his words slow and measured. He avoided controversy and focused on a particular point of duty, a specific virtue, or the correction of some vice. The cathedral chapter recommended that, although only twenty-seven years of age, the provost be named Grand Penitentiary of the diocese, and de Sales found himself taking many more confessions. 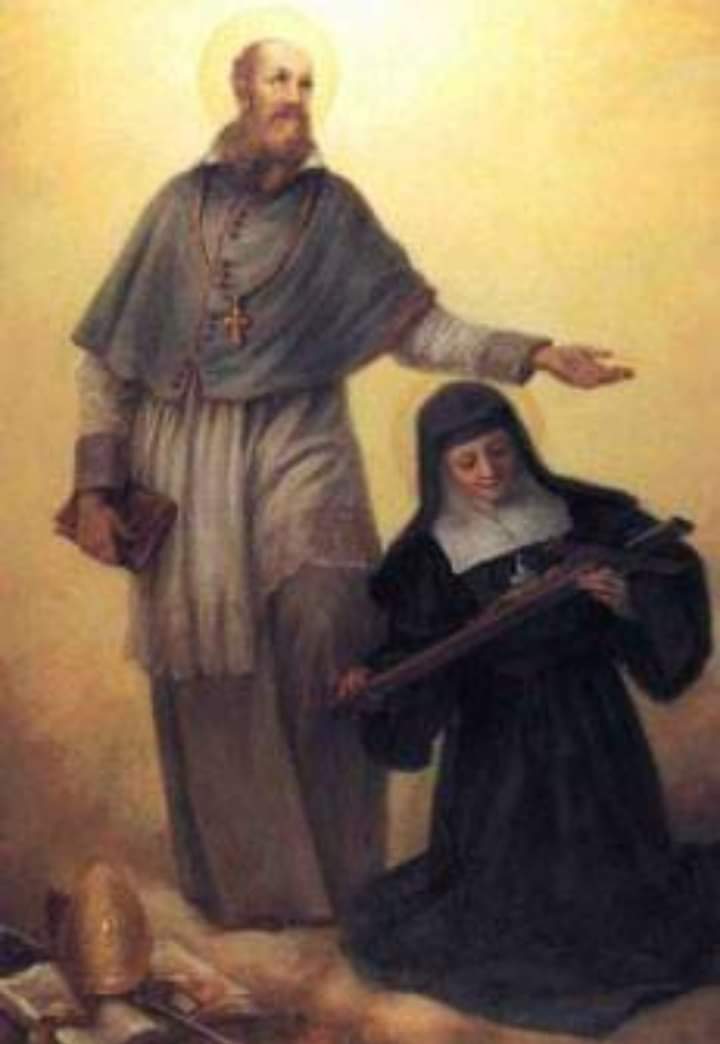 He was duly appointed the bishop of Geneva, a generation after John Calvin, a former future priest, had turned that deeply Catholic city into the Protestant Rome, leaving St. Francis as bishop of Geneva in little but name only. He is known also for his writings on the topic of spiritual direction and spiritual formation, particularly the Introduction to the Devout Life and the Treatise on the Love of God. In carrying out his ministry, St. Francis’ weapon of choice was the pen. His apologetic and spiritual works brought back tens of thousands of former Catholics to the faith after they had dabbled in Calvinism. 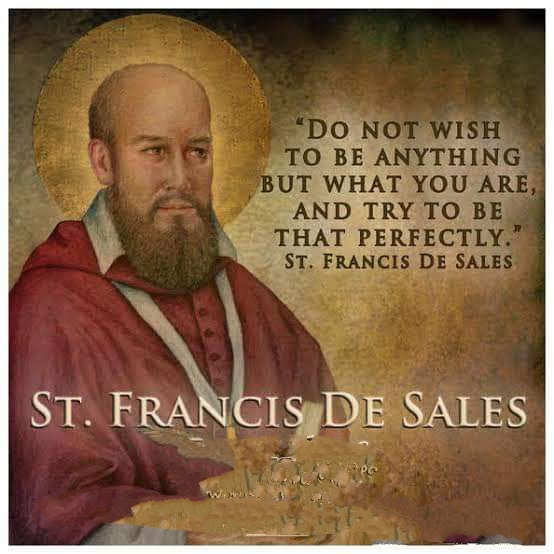 Saint Francis’s works were so profound, original, and creative, and his love of God so straightforward and understandable, that he would be declared a doctor of the Church in 1877. His most well-known book, is titled Introduction to the Devout Life. His sage spiritual advice to the faithful was to seek perfection in the mechanics shop, the soldier’s regiment, or on the wharf. God’s will was to be found everywhere, not just in monasteries and convents. 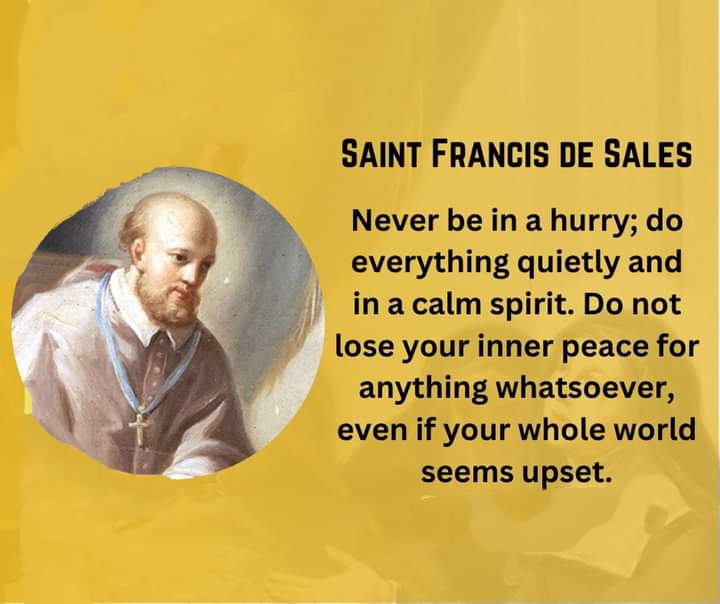 Many arduous pastoral trips through the mountains of his native region eventually wore him out. He never insisted on preferential treatment despite his status. He slept, ate, and traveled as a common man would. When he lay dying, mute after a terrible stroke, a nun asked him if he had any words of wisdom to impart. He asked for some paper and wrote three words on it: “Humility, Humility, Humility.” St. Francis is buried in a beautiful bronze sepulchre displaying his likeness in the Visitation Basilica and Convent in Annecy France. 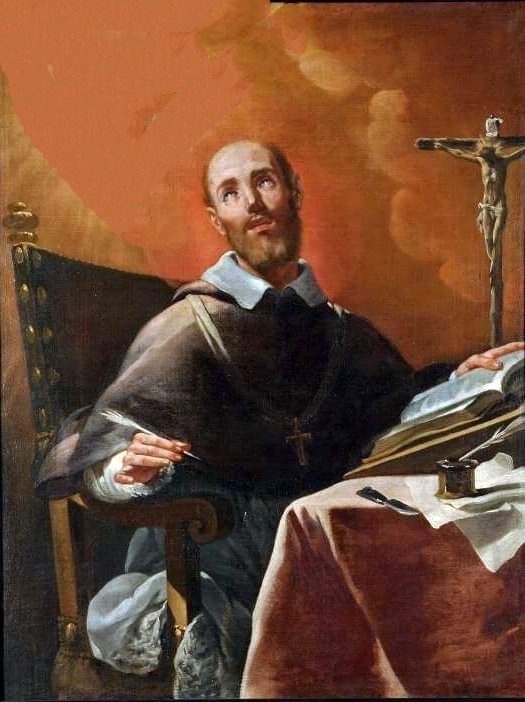 St. Francis de Sales has been styled “the Gentleman Saint” because of his patience and gentleness. Despite the resistance of the populace of Lyon to moving his remains from that city, Sales was buried on 24 January 1623 in the church of the Monastery of the Visitation in Annecy, which he had founded with Chantal, who was also buried there. Their remains were venerated there until the French Revolution. Many miracles have been reported at his shrine. De Sales’ heart was kept in Lyon, in response to the popular demand of the citizens of the city to retain his remains. 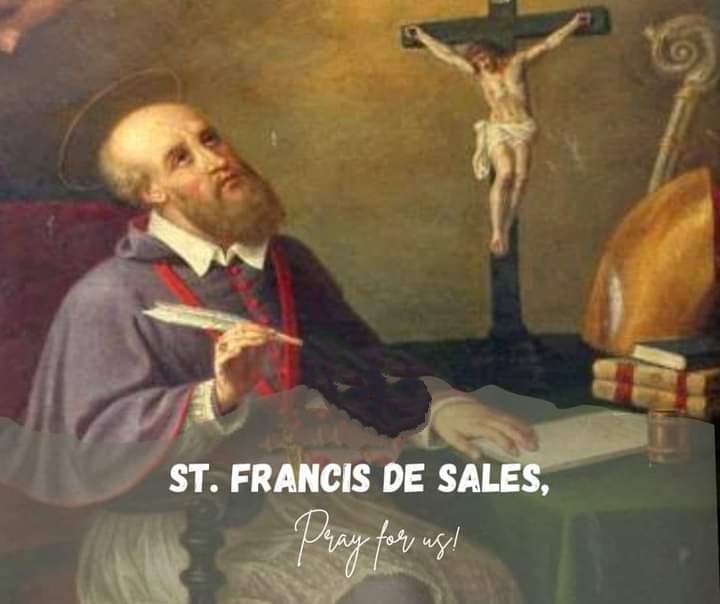 During the French Revolution, however, it was saved from the revolutionaries and carried by the Visitation nuns to Venice. Francis de Sales was beatified in 1661 by Pope Alexander VII, who then canonized him four years later. He was declared a Doctor of the Church by Pope Pius IX in 1877. The Roman Catholic Church celebrates his feast on 24 January, the day of his burial. 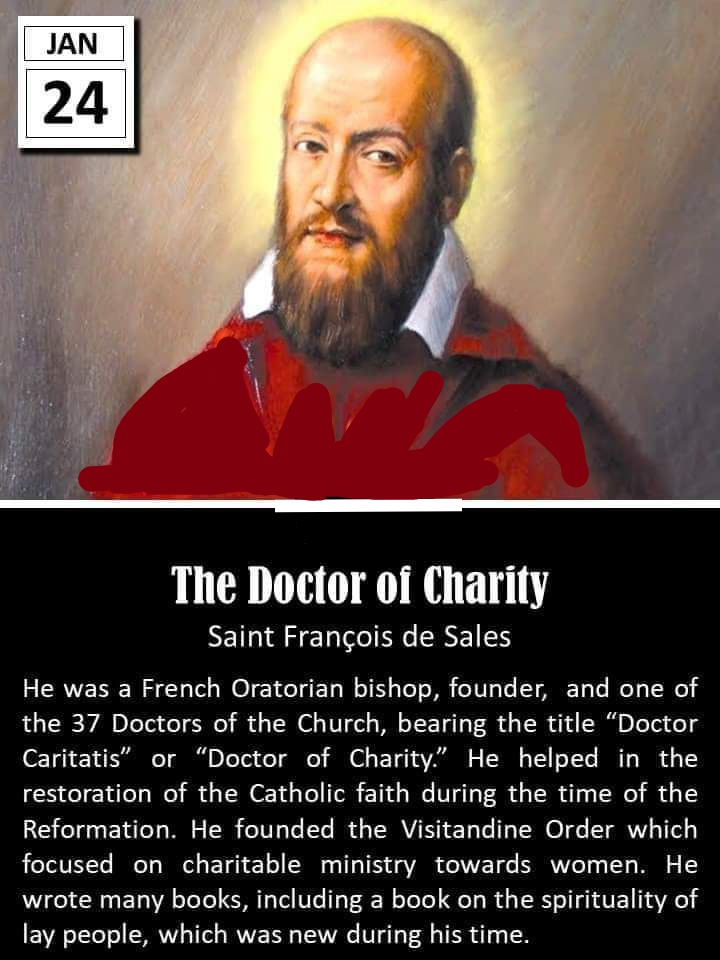 In 1923, Pope Pius XI proclaimed him a patron of writers and journalists, because he made extensive use of broadsheets and books both in spiritual direction and in his efforts to convert the Calvinists of the region. St. Francis developed a sign language in order to teach a deaf man about God. Because of this, he is the patron saint of the deaf. Having been founded as one of the first non-cloistered group of sisters after attempts to do so with the Visitation Sisters founded by de Sales and de Chantal, the Sisters of St. Joseph (founded in Le Puys, France, in 1650) take St. Francis de Sales as their patron. 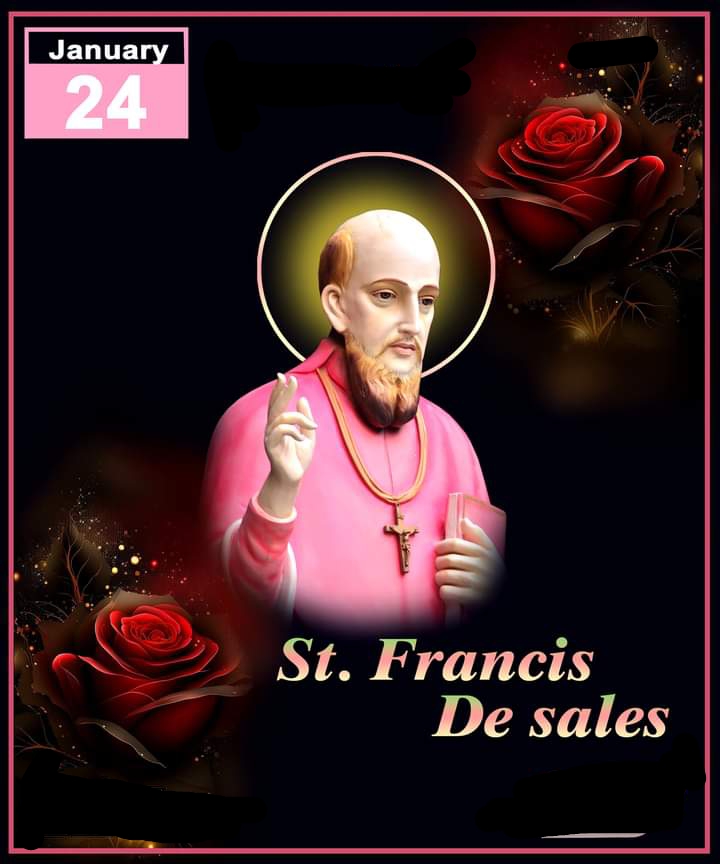 Almighty God, who provided for us great saints like St. Francis de Sales, we plead for his intercession to aid us in leading a balanced life of study, prayer, virtue, and service. Saint Francis was a model human being and bishop, who never expected special privilege.

May he help all those who teach the faith to convey the doctrine you have taught, with force, clarity, and depth, in Jesus’ Name. Amen 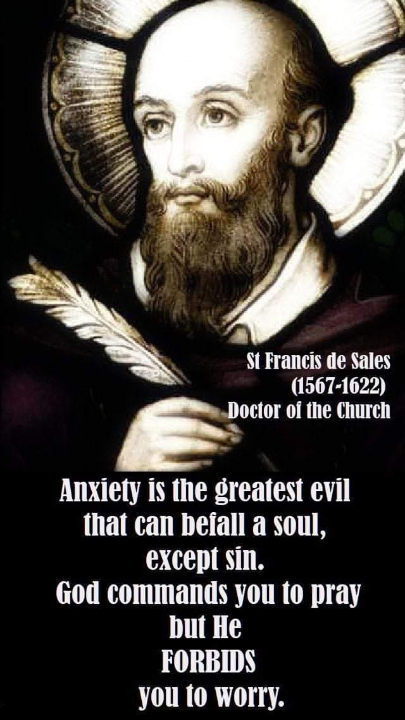 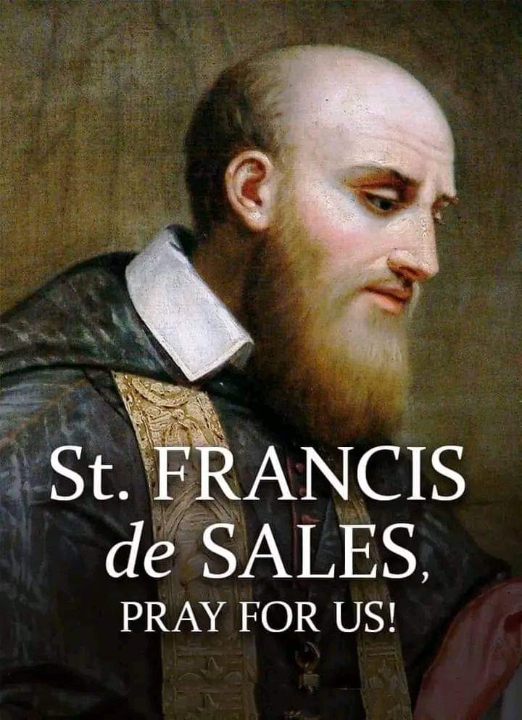